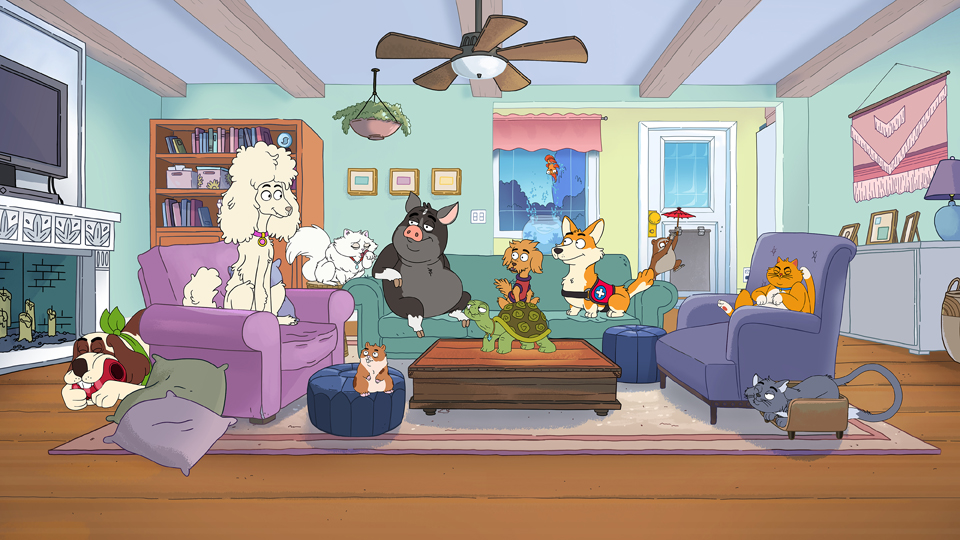 Featuring the voices of Lisa Kudrow, Tony Hale and Will Forte, animated comedy HOUSEBROKEN follows a group of neighbourhood pets and stray animals as they work through their issues inside and outside their therapy group. HONEY (Emmy Award winner Lisa Kudrow, “Friends”, “The Comeback”), a standard poodle, opens her living room for the group to come and support each other through the misery, mayhem and majesty that is being a pet. Honey also struggles with her own problems, such as her arranged (by her human) marriage with CHIEF (Nat Faxon, “The Way Way Back”), a sloppy St. Bernard who enjoys eating socks and licking himself.

The group includes SHEL (Will Forte, THE GREAT NORTH), a sex-positive tortoise with intimacy issues and a knack for choosing unconventional partners; TABITHA (Sharon Horgan, “Catastrophe”), an aging Persian cat beauty queen, trying to adjust to life off the cat show circuit; THE GRAY ONE (Jason Mantzoukas, “The Good Place”), a street smart cat who lives with about thirty other cats and has his one eye on Tabitha; CHICO (Sam Richardson, “Veep”), a chonky, co-dependent and very naive cat; and the group’s newest member, DIABLO (Emmy Award winner Tony Hale, “Veep,” “Arrested Development”), an anxious, sweater-wearing terrier whose OCD causes him to hump everything twice. Among the group’s other members are ELSA (Clea DuVall, “Veep”), a power hungry, know-it-all Corgi, and fake service dog, who drives Honey crazy; NIBBLES (guest voice Bresha Webb, “The Last O.G.”), a psychopathic hamster who is mourning the loss of her mate (whose face she ate…and everyone knows it); MAX (Hale), George Clooney’s pig, a former actor and current status obsessed a-hole; BUBBLES (guest voice Greta Lee, “Russian Doll”), a horny, teenage goldfish who lives with Honey and Chief, and heckles the animals any chance she gets; TCHOTCHKE, a silent, and possibly magical, slow loris with a mysterious past, who uses a tiny cocktail umbrella to express his emotions; and JILL (guest voice Maria Bamford, “Big Mouth”), Honey and Chief’s human owner.

HOUSEBROKEN is an irreverent look at human behavior, but told through the filter of an offbeat group of neighborhood pets. Throughout the series, the show centers on the pets’ dysfunctional relationships and their skewed world view, while exploring relevant societal issues in fun and unique ways.

The adventures continue in the Season Two premiere of DUNCANVILLE airing Sunday, May 23 (8:30-9:00 PM ET/PT), when the Harris family takes their first vacation. The episode features “Parks and Recreation” stars Adam Scott, Aubrey Plaza, Retta and Nick Offerman making guest voice appearances. Other storylines in the new season include Duncan saying the one thing no kid should ever say to their dad, which shifts their power dynamic; Duncan and Kimberly being sent to therapy camp; Jing and Jack starting a child birthday band together, with Annie managing them; and Duncan racing stock cars. Catch up on Season One on FOXNOW and Hulu.